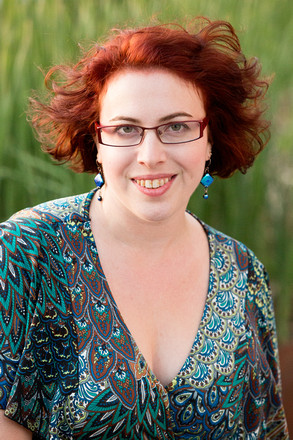 Orli Nativ is a costume designer, mixed-media artist, project manager, and interdisciplinary experience creator. She is passionate about the exploration of stories, expansive approaches to art-making, and the inherent capacity of objects to hold powerful meaning. She revels in deep, collaborative processes and devised projects. Her pursuit of costume as wearable story has given her an actor- and character-supportive design perspective, leading her to many wide-ranging projects, including puppet-creation, intuitive and designed mask-making, the creation of costumes in live flowers, and recent forays into the worlds of design for immersive entertainment.

Her costume designs have been seen with Opera Naples. the Cortland Repertory Theatre, Abingdon Theatre Company, Shadowland Theater, New York Shakespeare Exchange, Godlight Theater. Company, and many others. She is a frequent collaborator with Godlight, with whom she designed the world premiere of James Dickey’s Deliverance and the US Premiere of Cool Hand Luke at 59E59 Theatres with Joe Tantalo. Off-Broadway, Orli’s work includes The Chocolate Show, an original camp pageant-musical celebrating sweets. Her mask development work has been seen in China and Tibet. Passionate pursuit of transformational costuming work has led to specialty design for drag and burlesque, and she also designs for performers with disabilities.

Additional forays beyond costume design led Orli to creation of the short film There is Nothing Bad Which Could Not Turn Into Something Worse, an adaptation of Stanislaw Witkiewicz’s The Madman and the Nun, featuring a wide variety of puppet forms, as well as stop-motion animation of both puppets and humans. Her millinery and artisan crafts work has been seen in the New York Times Style Section, Time Out NY, and on Broadway in Natasha, Pierre, and the Great Comet of 1812 and A Gentleman's Guide to Love and Murder.

Recent projects for corporate clients include the "Malts of Legend" event for Dewar's, an immersive theatrical whisky-tasting; and the "Garden Getaway Tour" social media campaign for Hilton Garden Inn – featuring the creation of twelve live floral costumes in four cities, each requiring hundreds of hours of experimentation and meticulous production attention. She is a frequent collaborator with the theatreMAMA immersive marketing firm, where projects have included hand-painted mariachis for Cirque Du Soleil, elegant feathered brand ambassadors for Hennessy Black, and charming candycane greeters for the Radio City Christmas Spectacular.

Orli holds a BA in history, costume design, and imaginary anthropology from Hampshire College, and an MFA in Costume Design for Theatre and Dance from UC San Diego; studying under Judy Dolan. During her time at UCSD, she created multiple works with the choreographer Anya Cloud, working in both costume and digital media/projections to generate seamlessly integrated design elements to support experimental and improvisational dance explorations. Her costume designs for Titus Andronicus, directed by Joshua Kahan Brody, were shown at the 2015 Prague Quadrennial of Design and Performance. She is also a member of the Technical Artisans Collective, a craft-teaching program that supports academic education through dynamic, hands-on experiences taught by theatrical professionals.

When not designing, Orli is an avid dinner party hostess, enjoys long drives with science fiction audiobooks, and is working on her bread-baking skills. She lives in Brooklyn with her husband, the scenic designer & art director Colin McGurk. Together in their shared creative work as Extra Dimensional Studios, Colin and Orli focus on providing bespoke, detail-oriented design services for people, events, decor, products and spaces -- everything from 3D printing to floral design, concept creation to project management.